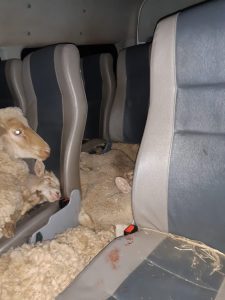 Five people have been arrested for allegedly stealing 30 sheep, which they loaded into a taxi in Aliwal North, Eastern Cape.

Police spokesperson Capt Ursula Roelofse said police followed up on information that the sheep were being transported in the taxi early on Friday morning.

The vehicle was stopped and the suspects arrested. Police recovered 30 sheep.

Roelofse said the suspects were allegedly part of a syndicate operating in the Eastern Cape and Free State.

The men, aged between 22 and 39, are expected to appear in the Aliwal North Magistrate’s Court on Monday.

-Sowetan Live / 2019-07-22
This report does not necessarily reflects the opinion of SA-news.